This page presents an extension to earlier research, see Superpixels Revisited. In particular, a comprehensive evaluation of 28 state-of-the-art algorithms on 5 different datasets is presented. To this end, a new benchmark was developed allowing to focus on a fair evaluation and designed to provide novel insights. The benchmark including all evaluated algorithms is available on GitHub. The corresponding paper is available on ArXiv.

The main contribution of the work is a comprehensive and fair comparison of 28 superpixel algorithms. This is motivated by the growing number of algorithms as well as varying experimental setups, making direct comparison of reported results difficult. Therefore, parameter optimization is discussed explicitly and the importance of enforcing connectivity is discussed. Superpixel algorithms are evaluated based on qualitative and quantitative measures as well as runtime. Furthermore, the influence of noise and implementation details is investigated. Finally, commonly used metrics such as Boundary Recall [2] and Undersegmentation Error [3] are rendered independent of the number of superpixels allowing to provide a final ranking of superpixel algorithms.

The paper can be downloaded below:

Superpixels group perceptually similar pixels to create visually meaningful entities while heavily reducing the number of primitives. As of these properties, superpixel algorithms have received much attention since their naming in 2003. By today, publicly available and well-understood superpixel algorithms have turned into standard tools in low-level vision. As such, and due to their quick adoption in a wide range of applications, appropriate benchmarks are crucial for algorithm selection and comparison. Until now, the rapidly growing number of algorithms as well as varying experimental setups hindered the development of a unifying benchmark. We present a comprehensive evaluation of 28 state-of-the-art superpixel algorithms utilizing a benchmark focussing on fair comparison and designed to provide new and relevant insights. To this end, we explicitly discuss parameter optimization and the importance of strictly enforcing connectivity. Furthermore, by extending well-known metrics, we are able to summarize algorithm performance independent of the number of generated superpixels, thereby overcoming a major limitation of available benchmarks. Furthermore, we discuss runtime, robustness against noise, blur and affine transformations, implementation details as well as aspects of visual quality. Finally, we present an overall ranking of superpixel algorithms which redefines the state-of-the-art and enables researchers to easily select appropriate algorithms and the corresponding implementations which themselves are made publicly available as part of our benchmark.

In order to keep the presented benchmark alive, we encourage authors to submit their superpixel algorithms and the corresponding results. This also allows authors to compare their approaches to the state-of-the-art and report a reproducible and fair comparison in the corresponding publications.

Apr 18, 2017. Interactive visualizations of qualitative and quanitative results have been added; fullscreen versions are also available: Qualitative Results, Quantitative Results. The source code can also be found on GitHub.

Apr 16, 2017. An implementation of the average metrics as described in the paper has been added to the benchmark. In addition, detailed instructions for adding/submitting new superpixel algorithms have been added to the documentation. The repository including documentaiton can be found here: davidstutz/superpixel-benchmark.

Apr 5, 2017. The reviews for the paper are summarized in this article: Reviews and Rebuttal for “Superpixels: An Evaluation of the State-of-the-Art”.

Mar 30, 2017. As of Mar 29, the paper was accepted for publication in Computer Vision and Image Understanding. The revised paper will be made available as soon as possible.

Feb 11, 2017. Thanks to Wanda Benesova, the source code of MSS has been added to the repository.

Jan 21, 2017. The NYUV2, SUNRGBD and SBD datasets are now available in the converted format used by the benchmark. Check out the data repository.

Jan 21, 2017. Thanks to John MacCormick and Johann Straßburg, the source code for PF and SEAW has been added to the repository.

Dec 20, 2016. Doxygen documentation (for the C++ parts, including the benchmark and several superpixel algorithms) is now available here.

Table 1 gives a brief overview of the evaluated algorithms. Note that due to the high effort involved in running fair experiments and preparing them for publications, all publicly available superpixel algorithms up to (and including) 2015 are included. Additionally, some implementations that are not publicly available were provided by the corresponding authors. Unfortunately, many proposed algorithms were not evaluated due to missing implementations, see [1] for a list.

Table 1: Overview of the evaluated algorithms, including their reference, the year of publication, the used programming language and the corresponding webpage as far as the implementation us publicly available.

The conducted experiments are based on the following datasets, evaluation measures and thorough parameter optimization.

The following datasets were used for evaluation:

BSDS500 [40]. The Berkeley Segmentation Dataset 500 (BSDS500) was the first to be used for superpixel algorithm evaluation. It contains 500 images and provides at least 5 high-quality ground truth segmentations per image. The images represent simple outdoor scenes, showing landscape, buildings, animals and humans, where foreground and background are usually easily identified. Nevertheless, natural scenes where segment boundaries are not clearly identifiable, contribute to the difficulty of the dataset.

SBD [41]. The Stanford Background Dataset (SBD) combines 715 images from several datasets. As result, the dataset contains images of varying size, quality and scenes. The images show outdoor scenes such as landscape, animals or street scenes. In contrast to the BSDS500 dataset the scenes tend to be more complex, often containing multiple foreground objects or scenes without clearly identifiable foreground.

Fash [44]. The Fashionista dataset (Fash) contains 685 images which have previously been used for clothes parsing. The images show the full body of fashion bloggers in front of various backgrounds.

Table 2: Number of training and testing images as well as the corresponding average image sizes for each dataset.

Boundary Recall [40]. Letting $FN(G,S)$ and $TP(G,S)$ be the number of false negative and true positive boundary pixels in $S$ with respect to $G$, Boundary Recall is defined as:

The above metrics inherently depend on the number of generated superpixels $K$. In order to summarize performance of algorithms independent of $K$, $\text{AMR}$, $\text{AUE}$ and $\text{AUEV}$ represent Average Miss Rate, Average Undersegmentation Error and Average Unexplained Variation. These metrics are computed as the area above the $\text{Rec}$ curve, below the $\text{UE}$ curve and above the $\text{EV}$ curve in the range of $[K_\min, K_\max] = [200,5200]$. The names are derived from the Miss Rate $\text{MR} = (1 - \text{Rec})$ and Unexplained Variation $\text{UEV} = (1 - \text{EV})$. Note that in the original version of the paper, these metrics where called Average Boundary Recall $\text{ARec}$ and Average Explained Variation $\text{AEV}$.

The following two sections briefly summarize some of the main experiments. Detailed discussion can be found in the paper.

The presented visualizations can be found in this GitHub repository. Fullscreen versions are also available: Qualitative Results, Quantitative Results.

The gallery below shows qualitative results on the BSDS500; specifically, superpixel segmentations for $K \approx 400$ superpixels and $K \approx 1200$ superpixels (top left and bottom right corners, respectively) for each algorithm are shown for an individual image taken from the BSDS500. Also check these Qualitative Results for more examples.

The interactive plots below show $\text{AMR}$, $\text{AUE}$ and $\text{AUEV}$ for all five datasets. Check the same results in fullscreen here.

Table 3 shows the final ranking as presented in the paper. The ranking takes into account both $\text{AMR}$ and $\text{AUE}$ reflecting the objective used for parameter optimization. For each algorithm, the table shows the rank distribution across the five datasets. 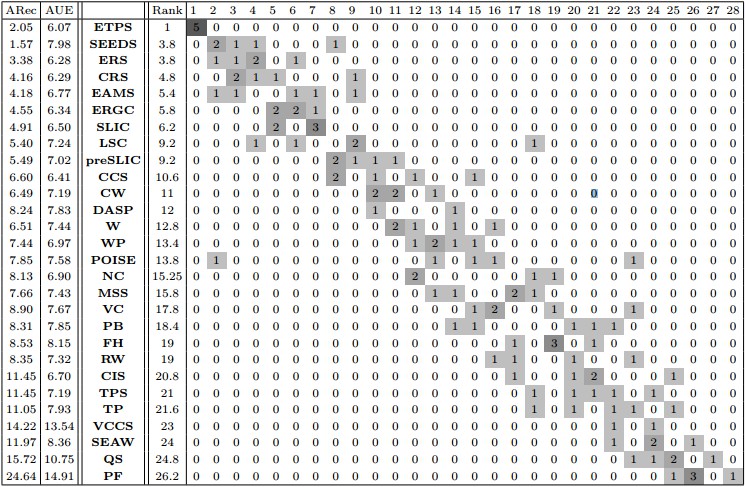 Regarding the mentioned aspects of superpixel algorithms, we make the following observatiobns:

I am grateful for the support of Alexander Hermans and Bastian Leibe. Furthermore, I want to thank all the authors for providing the implementations of their proposed superpixel algorithms. Finally, I acknowledge funding from the EU project STRANDS (ICT-2011-600623).