Towards a Definition for Adversarial Examples

The robustness of deep neural networks against so-called adversarial examples, imperceptibly perturbed images that cause mis-classification, has received considerable attention in the last few years — as can be seen in my earlier survey article. However, only few defenses against adversarial examples have been shown to be effective [][], leaving the problem largely unsolved — even for simple datasets such as MNIST [].

In this article, I argue that a proper definition of adversarial examples is particularly important when studying adversarial robustness in the context of toy datasets. While small image perturbations, usually bounded through a $L_p$ norm, will rarely change the actual, true label; it is significantly more difficult to ensure label-invariance on simpler toy datasets — especially when not considering images.

The following discussion is largely based on Appendix I of our ArXiv pre-print.

Background. Given a data distribution $p(x, y)$ over images $x$ and labels $y$ and a deep neural network $f$ with $f(x) = y$, an adversarial example is a perturbed image $\tilde{x} = x + \delta$ such that $f(\tilde{x}) \neq y$, that is, $\tilde{x}$ is mis-classified. With access to $f$'s parameters and gradients, the adversarial example $\tilde{x}$ can be computed by directly maximizing the cross-entropy loss:

Note that the $L_\infty$ norm can also be replaced by any other $L_p$ norm. Here, the $\epsilon$-constraint ensures label invariance: perturbations smaller than $\epsilon$ will never change the true label of the image. In practice, projected gradient descent can be used to solve this problem []. Some examples on EMNIST [] and Fashion-MNIST [] are shown in Figure 1. Note that the computed perturbations $\delta = \tilde{x} - x$ exhibit (seemingly) random noise patterns without much structure.

As shown in Figure 1, the $\epsilon$-constraint is effective in ensuring label-invariance on images. However, for other modalities this strategy might not work as well. For text, for example, adversarial examples are — strictly speaking — not imperceptible anymore. Still, flipping individual characters in long sentences does (usually) not alter the semantics.

In words, the data distribution consists of two point passes for the pairs $(0, 1)$ and $(\epsilon, -1)$. This problem is linearly separable for any $\epsilon > 0$. However, it seems that no classifier can be adversarially robust against an $\epsilon$-constrained adversary. For example, let the observation $x = 0$ with $y = 1$ and the adversarial example $\tilde{x} = x + \epsilon = \epsilon$. This adversarial example would fool any classifier that achieves linear separation; implying that no "good" classifier can be robust on this problem. Note, however, that a constant classifier will be robust — but not perform better than chance.

In the above example, an $\epsilon$-constraint on the absolute value of the perturbation does not ensure label-invariance as the adversarial example $\tilde{x}$ is, by construction, more likely to have label $y = -1$:

Then, the max-margin classifier with threshold $\frac{\epsilon}{2}$ will be accurate and robust when only allowing adversarial examples adhering to the following definition: 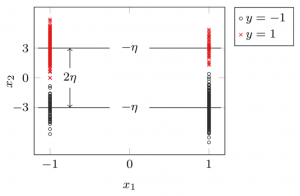