Papernot et al. introduce a novel attack on deep networks based on so-called adversarial saliency maps that are computed independently of a loss. Specifically, they consider – for a given network $F(X)$ – the forward derivative

Essentially, this is the regular derivative of $F$ with respect to its input; Papernot et al. seem to refer to is as “forward” derivative as it stands in contrast with regular backpropagation where the derivative of the loss with respect to the parameters is considered. They define an adversarial saliency map by considering

where $t$ is the target class of the attack. The intuition of this definition is the following: The partial derivative of $F_t$ with respect to $X$ at location $i$ indicates how $X_i$ can be changed in order to increase $F_t$ (which is the goal). At the same time, $F_j$ for all $t \neq j$ is supposed to decrease for the targeted attack, this is implemented using the second (absolute) term. If, at a specific feature $X_i$, not increase of $X_i$ will lead to an increase of $F_t$, or an increase will also lead to an increase in the other $F_j$, the saliency map is zero – indicating that feature $i$ is useless. Note that here, only increases in $X_i$ are considered; Papernot et al. have a analogous formulation for considering decreases of $X_i$.

Based on the concept of adversarial saliency maps, a simple attack is implemented as illustrated in Algorithm 1. In particular, the feature $X_i$ for which the saliency map $S(X, t)$ is maximized is chosen and increased by a fixed amount until the network $F$ changes the label to $t$ or a maximum perturbation is reached (in which case the attack fails). 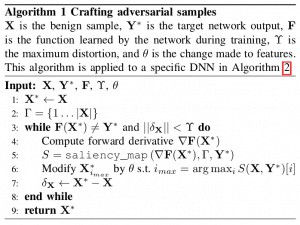 In experiments on MNIST they show the effectiveness of the proposed attack. Additionally, they attempt to quantify the robustness (called “hardness”) of specific classes. In particular, they show that some classes are harder to attack than others. To this end they derive the so-called adversarial distance

which counts the number of features in the adversarial saliency map that are greater than zero (i.e. can be perturbed during the attack in Algorithm 1). Personally, I find this “hardness” measure quite interesting because it is independent of a specific loss, but directly takes statistics of the learned model into account.

Also find this summary on ShortScience.org.
What is your opinion on this article? Let me know your thoughts on Twitter @davidstutz92 or LinkedIn in/davidstutz92.