The Retinex theory, as originally developed by Land and McCann [1], can be seen as fundamental theory for several state-of-the-art intrinsic image algorithms. This article discusses a mathematical formulation of the Retinex algorithm and also presents experimental results.

The problem of estimating intrinsic images, that is reflectance and shading, from a single image has already been addressed in 1971 by Land and McCann [1] as well as in 1978 by Barrow and Tenenbaum [4]. Researchers within the computer vision and image processing communities agree that solving this problem would be beneficial for many problems in vision and graphics. After discussing some related work and important datasets in the article Intrinsic Images – Introduction and Reading List, this article will introduce a mathematical formulation of the Retinex theory as originally developed by Land and McCann [1]. Further, we introduce the partial differential equation formalization given by Morel et al. [28] which can easily be implemented in practice.

Formally, we define the problem of intrinsic images as follows:

Problem. Given an input image

Note that the problem of intrinsic images as originally stated by Barrow and Tenenbaum [4] also includes other intrinsic characteristics as for example depth, surface orientation, occlusion and motion boundaries or optical flow. 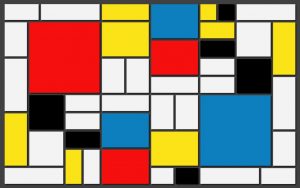 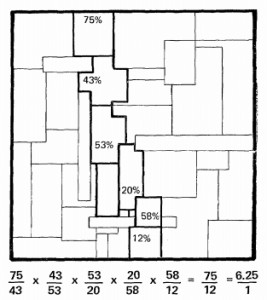 Figure 1 (click to enlarge): An illustration of the intuition behind the Retinex theory. Left: An example of the typical style of Mondrian's paintings. Right: The path-based reflectance computation as proposed by Land and McCann [1].

The intuition behind the Retinex theory, illustrated on the example of a Mondrian image with artificial, smooth shading, can be described as follows. The reflectance ratio of two selected patches within the Mondrian image can be determined by following a path between them. Along the path, we multiply the measured intensity ratios. At the border of patches, the intensity ratios will correspond to reflectance changes, while within the patches, the intensity ratios will be close to one. Land and McCann [1] propose to threshold these ratios to suppress intensity changes due to shading, which is assumed to be smooth. The final ratio will be equal to the actual reflectance ratio between the two patches.

The formalization of the described algorithm, as well as its extension to color images, is due to Horn [3] and Blake [5], however, we follow Morel et al. [28]. The reflectance for each pixel in channel $I_c$ is computed by considering a family $\{x_{k}\}_{k = 1}^{K_j} \subseteq \underline{H} \times \underline{W}$ of $J$ paths. For a given pxel $x_n \in \underline{H} \times \underline{W}$, all of these paths start at $x_n$ and end at an arbitrary pixel within the image. Then the reflectance $R_c(x_n)$ of pixel $x_n$ in channel $c$ is computed as

The main problem of this approach is the problem of choosing the paths $\{x_{k}\}_{k = 1}^{K_j}$ such that equation (1) both can be computed efficiently and calculates the proper reflectance (that is, a good approximations thereof).

Morel et al. [28] propose a partial differential equation formalization of the Retinex theory. We follow [28] and discuss both the basic framework and the practical implementation.

We consider a family of $J$ random paths $\{x_{k}\}_{k = 1}^{K_j} \subseteq \underline{H} \times \underline{W}$, each of which starts at pixel $x_n$ and ends at a randomly chosen pixel. The random paths are defined on the plane $\mathbb{Z}^2$, however, are reflected on the image borders, resulting in well-defined paths within the image plane. Then, the lightness of pixel $x_n$ in channel $I_c$, in analogy to equation (1), can be written as

Note that, in contrast to equation (1), this can be interpreted as expectation of the relative reflectance defined by one such random path [28].

Utilizing the random path framework, Morel et al. [28] show that the reflectance $R_c$ is the solution of the Poisson equation

The Poisson equation (4) can be solved efficiently using discrete Fourier transform [28,31]. We follow [31] and briefly derive the necessary equations. The discrete, two-dimensional Fourier transform of the function $F_c$ is given as

while the inverse, discrete, two-dimensional Fourier transform of the image channel $I_c$ can be written as

Transforming both sides of equation (4) by the discrete, two-dimensional Fourier transform yields the following relationship:

The Retinex algorithm as implemented by Morelet al. [28] can easily be generalized to video. The Poisson equation, as formualted for the image $I$ in equation (4), equally holds for the video $V$ and equations (5) and (6) may easily be generalized to three dimensions. Only the right hand side $F_c(x_n)$, $X_n \in \underline{H} \times \underline{W} \times \underline{T}$, of equation (4) needs to be adapted as follows:

An implementation is provided by Limare et al. [32], available on GitHub, and uses FFTW3 [33] to compute the discrete cosine transform in two or three dimensions. Each image channel $I_c$ is processed independently. An OpenCV [34] wrapper can also be found on GitHub.

The main limitation when generalizing to video is the temporal segmentation needed due to memory limitations. However, the algorithm can be applied on short, overlapping subsequences which are fused afterwards. In the best case, these overlapping regions could be encoded as constant boundary condition for the Poisson equation (4).

Figure 2 shows the influence of the threshold $\tau$ on two images, one taken from the dataset by Bell et al. [7] and another one taken from the dataset by Beigpour et al. [29]. Further, figure 3 compares the Retinex algorithm to the approach by Bell et al. [7], available on GitHub. Note that shading can, theoretically, not be recovered without knowing illumination. However, Bell et al. [7] assume white illumination to approximate shading and their algorithm, therefore, also returns shading which is excluded for comparison.

The Retinex algorithm can be seen as the first approach to intrinsic images. Therefore, as seen in figure 3, the results are not comparable to state-of-the-art approaches as for example provided by Bell et al. [7]. However, the assumptions made by the Retinex theory, in particular smooth shading and piece-wise constant reflectance, are still used in many recent approaches. State-of-the-art approaches even add additional assumptions as for example sparsity of reflectance [9,13] or use additional information as for example depth [10,21] or video [21,25]. Overall, the problem is inherently global such that local decisions as made by the Retinex algorithm give poor results. It would be interesting to investigate whether the global problem, especially regarding complex scenes, can be decomposed into simpler local problems which are easier to solve. Further, for several applications, we need to ask whether true reflectance is actually necessary to improve performance of subsequent tasks. For example in image segmentation, reflectance and shading provided by a state-of-the-art algorithm can also be seen as additional feature without the requirement of begin true reflectance and shading.