In July this year I finally defended my PhD which mainly focused on (adversarial) robustness and uncertainty estimation in deep learning. In my case, the defense consisted of a (public) 30 minute talk about my work, followed by questions from the thesis committee and audience. In this article, I want to share the slides and some lessons learned in preparing for my defense.

My PhD defense marks the successdful end of a four year journey in machine learning and computer vision research. While defense vary widely across institutions and universities, I had to prepare a 30 minute talk that is followed by questions from the committee and audience. In addition to the difficulty of squeezing several papers into a 30 minute polished talk, there was also a significant delay between submitting and defending my PhD — roughly 4 months. While I can't share the final thesis yet, you can find my defense slides below, followed by some lessons learned in preparing for my defense. 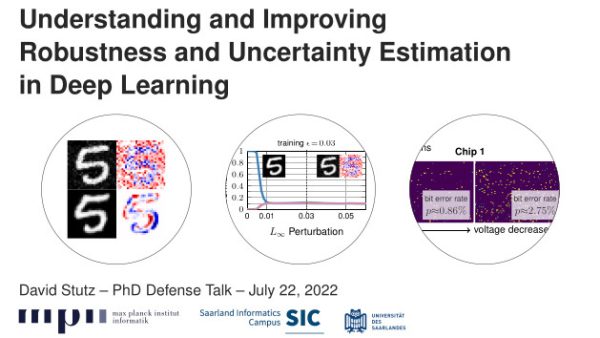 The slides include some GIFs, so with 27MB the download might take a second. Also, make sure to view them in a PDF viewer supporting animations:

Preparing for my defense took significantly longer than I initially estimated. I thought it could not be too hard to put together slides of all my projects, given that I already gave a few talks and had slides for most of my papers ready. However, preparing a polished talk that highlights achievements, giving a good high-level intuition while at the same time demonstrating technical knowledge, was incredibly difficult and took multiple iterations. Besides, I wanted to talk to steer the committee's questions to some extent and make sure I will stick to the 30 minute limit. Here are some lessons I learned surrounding the preparation:

Regarding the content of the talk, I found the following to work well — and I found a similar scheme can be found in many other defenses, as well: