Adversarial examples, imperceptibly perturbed examples causing mis-classification, are commonly assumed to lie off the underlying manifold of the data — the so-called manifold assumption. In this article, following my recent CVPR’19 paper, I demonstrate that adversarial examples can also be found on the data manifold, both on a synthetic dataset as well as on MNIST and Fashion-MNIST. 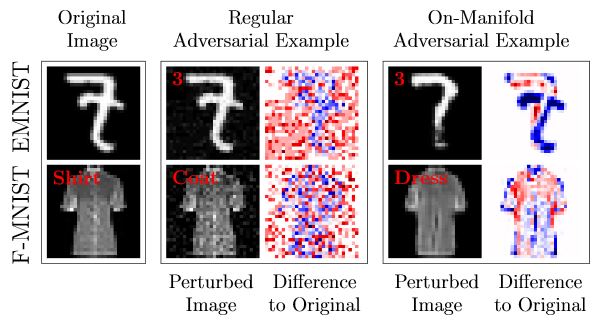 In the following, I assume that the data manifold is implicitly defined through the data distribution $p(x, y)$ of examples $x$ and labels $y$. A probability $p(x, y) > 0$ means that the example $(x, y)$ is part of the manifold; $p(x, y) = 0$ means the example lies off manifold. With $f$, I refer to a learned classifier, for example a deep neural network, that takes examples $x$ and predicts a label $f(x)$. Then, an on-manifold adversarial example $\tilde{x}$ for $x$ needs to satisfy $f(\tilde{x}) \neq y$ but $p(y|\tilde{x}) > p(y'|\tilde{x})$ for any $y' \neq y$. Note that this condition implies that the optimal Bayes classifier classifies the adversarial example $\tilde{x}$ correctly, but $f$ does not. These adversarial examples can also be thought of as test errors; however, in the following, I will show how to compute them in an "adversarial way".

where $\mathcal{L}$ is the cross-entropy loss and $\eta$ constraints the size of the perturbation $\zeta$ in the latent space. This approach is illustrated in Figure 1; in practice, given $(x,y)$, $z$ is obtained as $z = \text{enc}(x, y)$, Equation (1) is maximized through projected gradient ascent and the perturbed latent code $z + \zeta$ is passed through the decoder to obtain the adversarial example $\tilde{x} = \text{dec}(z + \zeta)$. 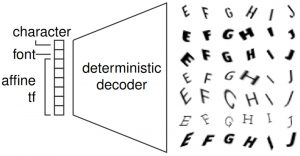 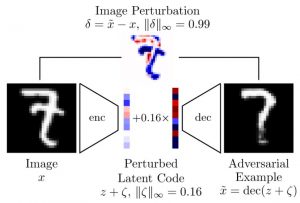 Figure 2: Illustration of the synthetic dataset, FONTS, and the used decoder for computing on-manifold adversarial examples (left) and a depiction of the VAE-GAN used on MNIST/Fashion-MNIST (right).

For experimenting with on-manifold adversarial examples, I created a simple synthetic dataset with known manifold. This means that the conditional data distribution $p(x, y | z)$ is known and, in practice, implemented using a pre-defined (not learned) decoder. Particularly, as illustrated in Figure 2, the latent codes $z$ determine a font type (from Google fonts), a letter (between "A" and "J") and an affine transformation (within reasonable bounds). As a result, the obtained images contain transformed characters "A" to "J" — corresponding to a 10-class problem. The images are MNIST-like, meaning grayscale images of size $28 \times 28$ and nearly binary.

On MNIST [] or Fashion-MNIST [], the manifold is learned using VAE-GANs [][] as also illustrated in Figure 2; as a result, the decoder used in Equation (1) is not perfect. But on MNIST and Fashion-MNIST, I found that VAE-GANs are capable of representing the manifold well enough with a $10$-dimensional latent space.

For solving Equation (1), I used 40 iterations of ADAM with projections onto the $L_\infty$-ball of size $\eta = 0.3$ after each iteration. On FONTS, the manifold is automatically constrained by the allowed transformation parameters (see Figure 2). On MNIST and Fahsion-MNIST, I additionally constrained the latent code to lie within $[-1, 2]^10$ — roughly corresponding to two standard deviation son the latent space.