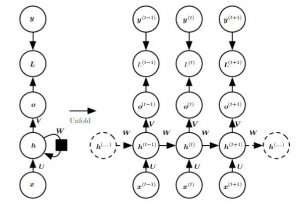 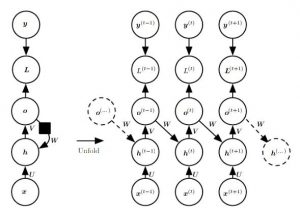 The key idea that makes recurrent neural networks interesting, is that the parameters (i.e. $W$, $U$, $V$ ...) are shared across time, allowing for variable length sequences to be processed. In addition, parameter sharing is important to generalize to unseen examples of different lengths. The general equations corresponding to the first scheme are as follows:

Recurrent neural networks are generally trained using error backpropagation through time, which describes error backpropagation applied to the individual networks starting from the last time step and going back to the first time step. As the parameters across time are shared, the gradients with respect to the involved parameters represent sums over time. For example, regarding $W$ the gradient is easily derived (by recursively applying the chain rule) as

when considering the first model of Figure 1.

While the presented recurrent network is shallow - having only one hidden layer - deep recurrent neural networks can add multiple additional layers. Interestingly, one has many options of how these additional layers are connected through time. Goodfellow et al. illustrate this freedom using Figure 2. Note that the black square indicates a time delay of one time step for unfolding (see chapter 10.1 for details) the model. 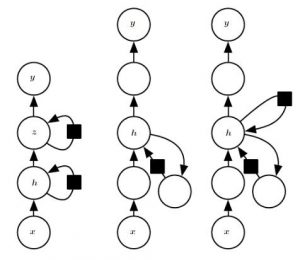 What is your opinion on the summarized work? Or do you know related work that is of interest? Let me know your thoughts in the comments below: