A high -level view of the proposed approach is shown in Figure 2. They utilize R-CNN to obtain object detections and train a CNN similar to [27,37] to obtain semantic segmentations. In addition to the CRF on top of the semantic segmentation CNN as in [37], they also consider potentials derived from the detections. Given a densely-connected CRF (i.e. comprising unary and pairwise potentials), new random variables $Y_1,\ldots,Y_D$ are introduced – one variable for each detection. If a detection is found to be valid, the corresponding variable will be set to 1. Letting $F_d$ be the set of foreground pixels of a detection (obtained using GrabCut), the detection potential is given by

Figure 2: Illustration of the overall pipeline consisting of convolutional neural network with integrated CRF (including detection potential) for semantic segmentation, and the instance CRF.

After predicting a semantic segmentation using the adapted CRF, another CRF is used for instance identification an refinement. Instead of labeling all pixels inside a bounding box as a instance (i.e. if the bounding box prediction and the label coincide), Arnab and Torr assign a probability to each pixel within the bounding box:

Here, $v_i$ denotes the identified instance at pixel $i$ and as such takes values from $1,\ldots,D$. Further, $Q_i(l)$ denotes the output of the initial semantic segmentation and $Z$ normalizes the probability. In order to assign pixels to background, an additional detection $d_0$ is added. The instance CRF takes the form:

where the pairwise potential encourages appearance and spatial consistency. Also note that this instance CRF is different for each image, i.e. the number of detections (and therefore, labels) changes from image to image. Both CRFs are unrolled and integrated into the convolutional neural network.

In experiments, they show that the introduced detection potentials increase performance. Some qualitative results are shown in Figure 3. 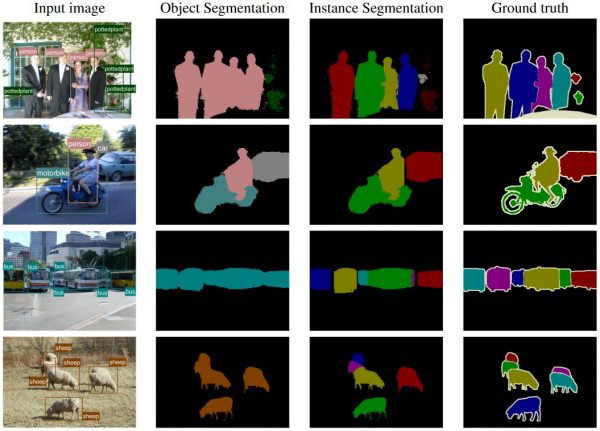