Adversarial examples are commonly assumed to leave the manifold of the underyling data — although this has not been confirmed experimentally so far. This means that deep neural networks perform well on the manifold, however, slight perturbations in directions leaving the manifold may cause mis-classification. In this article, based on my recent CVPR’19 paper, I want to empirically show that adversarial examples indeed leave the manifold. For this purpose, I will present results on a synthetic dataset with known manifold as well as on MNIST with approximated manifold. 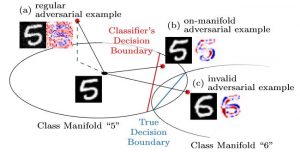 In my previous post, I outlined how to explicitly constrain adversarial examples to the manifold. On FONTS, a synthetic dataset with known manifold introduced in my recent CVPR'19 paper [], and on MNIST [] using an approximated manifold, these on-manifold adversarial examples result in meaningful manipulation of the image content, as shown in Figure 1. This is in stark contrast to the seemingly random noise patterns of regular, unconstrained adversarial examples. Overall, these experiments further support the hypothesis that adversarial examples leave the underlying data manifold.

is solved iteratively using projected gradient ascent. This means that after each gradient ascent iteration, the current perturbation $\delta$ is projected back onto the $L_\infty$-ball of radius $\epsilon$ and individual pixel values of $\tilde{x}$ are clipped to $[0,1]$. Optimization can be stopped as soon as $f(x) \neq y$, meaning the label changed. In contrast to the on-manifold adversarial examples, the perturbations $\delta$ are not constrained to be "meaningful". As a result, the perturbations are often seemingly random, see Figure 1. 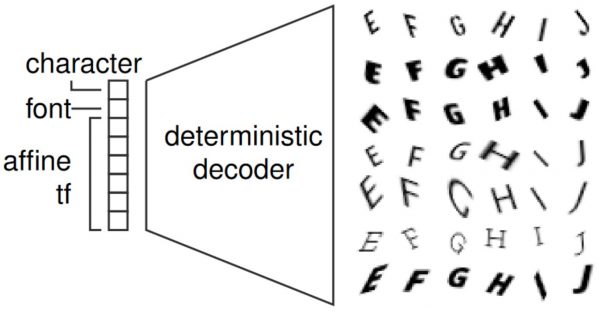 FONTS is a synthetic, MNIST-like datasets containing images of size $28 \times 28$ depicting randomly transformed characters "A" to "J" taken from a diverse set of Google Fonts. Here, the manifold in terms of the used font, the class and the transformation parameters is known. Specifically, let $z$ denots the font, character and affine transformation (shear, scale, translation and rotation), the generative process is modeled using the decoder shown in Figure 2 and detailed in an earlier blog post. Specifically, a prototype image is generated by rendering the given character in the given font and a spatial transformer network applies the affine transformation. As a result, the generative process is differentiable. Thus, given an adversarial example $\tilde{x}$, we can search the latent space for the closest on-manifold example as follows: 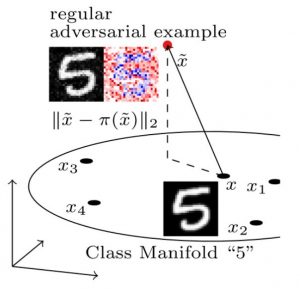 Figure 2: Illustration of the generation process of FONTS, illustrating the underlying, known manifold; using the depicted decoder, adversarial examples can be projected onto the manifold iteratively.

On MNIST, the manifold is not known. However, as illustrated in Figure 3, a simple $k$-nearest neighbor approximation is sufficient. In particular, given an adversarial example $\tilde{x}$ corresponding to the image $x$, the $50$ nearest neighbors $x_1, \ldots, x_50$ of $x$ are found. The adversarial example $\tilde{x}$ is then projected onto the supspace spanned by the vectors $x_i - x$. The projection $\pi(\tilde{x})$ can be computed using least squares allowing to obtain the distance $\|\pi(\tilde{x}) - \tilde{x}\|_2$. In comparison to FONTS, this distance will not be zero even for examples from the manifold, meaning training or test examples. However, the distances can easily be compared to adversarial examples that are constrained to an approximation of the MNIST manifold. 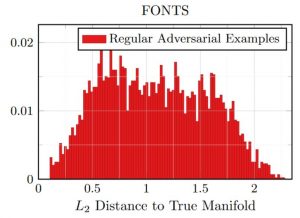 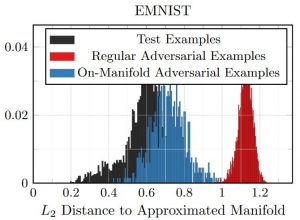 Overall, this article shows that adversarial examples can be shown to (empirically) leave the underlying manifold of the data — both if the manifold is known and approximated. This means that the observed lack in adversarial robustness might be due to missing guidance of what to compute/how to behave off manifold. In future articles, I will built upon these insights and show how on-manifold adversarial examples can be used to improve generalization — resulting in an approach similar to adversarial data augmentation — and how to potentially improve both robustness and generalization when guiding the network how to behave off manifold.