With the rising success of deep neural networks, their reliability in terms of robustness (for example, against various kinds of adversarial examples) and confidence estimates becomes increasingly important. Bayesian neural networks promise to address these issues by directly modeling the uncertainty of the estimated network weights. In this article, I want to give a short introduction of training Bayesian neural networks, covering three recent approaches.

In deep learning, stochastic gradient descent training usually results in point estimates of the network weights. As such, these estimates can be interpreted as maximum likelihood or maximum a posteriori estimates (potentially given a prior on the weights). Bayesian approaches, in contrast, aim to estimate the posterior distribution over weights. The posterior itself can be used to quantify the networks uncertainty, for example, on previously unseen, out-of-distribution examples. Recently there has been icnreasing work on scalable approaches to Bayesian deep learning. In this article, I want to present three different lines of work:

Maximum Likelihood and Maximum A Posteriori

where the negative log-likelihood $-\log p(y | x, w)$ results in a cross-entropy error (or a squared error in the case of regression). Regularization is usually added through a prior $p(w)$ on the weights and performing maximum a posteriori:

With a unit Gaussian prior, this usually corresponds to $L_2$ regularization — commonly referred to as weight decay. In both cases, optimization is usually done using mini-batches, resulting in stochastic gradient estimation. Overall, however, point estimates of the network weights are obtained, without any knowledge of the underlying uncertainty.

In Bayesian machine learning, types of uncertainty are considered []:

In contrast to the approaches discussed above, Bayesian modeling allows to capture epistemic uncertainty by estimating the posterior

Unfortunately, this posterior is not tractable for state-of-the-art neural networks. However, there exist efficient methods for estimating a surrogate distribution, as done in variational inferece, or for sampling from it. In both cases, drawing samples $w \sim p(w | D)$ allows to make make predictions using a Monte Carlo estimation of

Alternatively, some approaches which do not support to directly sample from the posterior $p(w | D)$, allow to estimate Equation (1) implicitly — for example, through dropout or batch normalization.

Similar to variational auto-encoders [], the posterior $p(w | D)$ can be approximated using a $q_\theta(w) = q_\theta(w | D)$ with known form and parameters $\theta$. For example, in [][], $q$ is assumed to be Gaussian in which case $\theta$ includes mean and variance. Instead of estimating the weights $w$ in maximum likelihood or maximum a posteriori estimation, the parameter means and variances are estimated by minimizing the Kullback-Leibler divergence

As the KL-divergence above is not tractable [], an alternative objective is minimized:

This corresponds to the original KL-divergence plus an additive term as can be seen below:

In order to minimize Equation (2), different works [][] follow different strategies: Graves [] models $q_\theta(w)$ using a Gaussian for each individual weight $w_i$, meaning the weights are assumed to be independent:

Similarly, the prior can also be chosen Gaussian:

As a result, the KL-divergence $\text{KL}(q_\theta(w) | p(w))$ can be computed analytically as described in []. Then, the remaining data term (first term) of Equation (2) is computed using Monte Carlo samples.

Alternatively, Blundell et al. [] use a non-Gaussian prior, see the paper, which means that the KL-divergence in Equation (2) also needs to be computed using Monte Carlo samples — however, these are required for the data term anyway.

The remaining issue is how to differentiate Equation (2) with respect to the parameters $\theta$ of the variational approximation $q_\theta(w)$ through the sampling process to compute:

At this point, similar to variational auto-encoders [], a reparameterization trick is used. This means, that the sampling process $w \sim q_\theta(w)$ is reparameterized through a deterministic function and an auxiliary noise variable. For a Gaussian model, this looks as follows:

with $\theta_i = \{\mu_i, \sigma_i^2\}$; as a result, $w_i$ is normally distributed with mean $\mu_i$ and variance $\sigma_i^2$. For other distributions, similar tricks have been found as shown for variational auto-encoders, for example [].

Then, with this reparameterization trick, the derivatives with respect to $\theta$ can be computed as follows:

Overall, Equation (2) can be optimized using stochastic gradient descent. In practice, as with variational auto-encoders $L = 1$ samples might be sufficient. As a result, uncertainty over the weights is explicitly quantified by the estimated variance $\sigma_i^2$ which also implies uncerainty on the predictions, which is usually reduced using Monte Carlo estimates as in Equation (1).

Welling and Teh [] propose to add gradient noise during training. So, going back to our maximum a posteriori estimate, the stochastic gradient updates look as follows:

where $w^{(t)}$ is the current iterate of the weights. In order for the iterates $w^{(t)}$ to approximate samples from the posterior $p(w|D)$ (after some burn-in phase), normally distributed gradient noise is added in addition to the stochasticity induced through mini-batch training:

This approach is simple compared to the variational approach. While there is no known form of the (approximate) posterior, samples can be extracted from the training trajectory.

While both approaches above allow to easily obtain samples $w \sim p(w | D)$ from the posterior distribution, the following two approaches only allow to approximate Equation (1), meaning 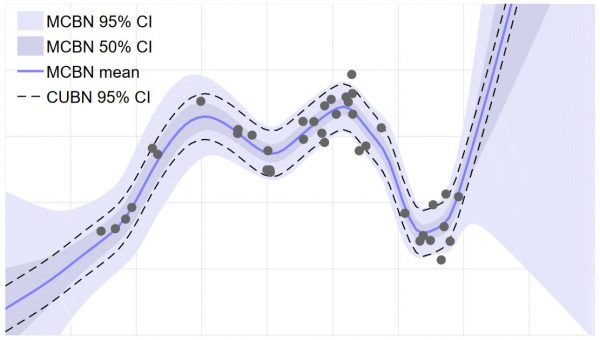 Figure 1: Illustration of the uncertainty obtained through batch normlization on a simple toy dataset.

As shown in Figure 2 from [], these approaches allow to represent uncertainty on predictions, potentially improving estimates on out-of-distribution examples. Recent work also argues that Bayesian approaches improve robustness against adversarial examples []. However, scaling these approaches to challenging datasets, e.g., in computer vision is still challenging.